The clocks will go forward an hour this weekend as the UK changes back to British Summer Time. However, one MP is calling on the government to put clocks forward an extra hour this year. 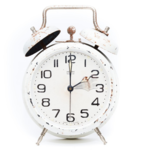 According to Tim Yeo, the move would not cost the UK anything and would boost tourism as well as reduce energy consumption.

He said the move would cut CO2 emissions and reduce utility bills for the average UK consumer by five per cent.

On top of that, the Royal Society for the Prevention of Accidents claims the move could save as many as 100 lives a year and countless serious road accidents could be avoided.

Mr Yeo said: "When the country is struggling with recession and the governor of the Bank of England warns that the cupboard is bare, why do the government resist this practical and cost-free measure?"

The idea of daylight saving was first considered in 1907 by William Willett.