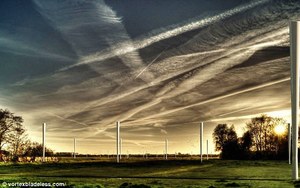 The rise in alternative energy has led to a landscape dotted with wind turbines becoming a familiar one, but now that view may be about to change.

A Spanish company called Vortex Bladeless has produced a new design of wind turbine that has no blades, and looks much like ‘an asparagus,’ according to David Suriol – one of the founders of Vortex Bladeless. This giant, straw-like object operate by vibrating in the wind, and vibrations are then converted into stored energy.

For years, wind turbine engineers have been plagued with the problem that placing an object in the path of the wind will create an undulating vortex behind that object. The concept behind the Vortex Bladeless design is that the turbine takes advantage of this vortex. The thin, cone-shaped turbine is made of carbon fibre and fiberglass, with the motor at the bottom instead of the top to improve sturdiness. The design ensures that the wind's vortex spins in sync along the entire cone. A ring of magnets at the base of the cone give the rotations a boost regardless of wind speed.

Vortex Bladeless say that the new turbines are 53% cheaper to manufacture and 51% cheaper to operate than the traditional wind turbines. They are cheaper to maintain – up to 80% as there is no friction from moving parts, which reduces the need for oiling and bolt replacements. The turbines also boast a 40% carbon footprint reduction, and significantly lower global power generation costs – making them an even greener alternative to today's renewable technologies. The current bladeless model, the 41-foot Vortex Mini tube, captures around 30% less energy than a traditional wind turbine, but can also be packed more densely into a given space.

A snippet from the Vortex Bladeless Blog states: Vortex currently takes up as much as 30% of the area of a conventional generator, with maximum amplitude around a diameter at the top. It can capture about 40% of the wind power contained in the air – which is a more than reasonable capacity – and can do so at the same height as many modern wind turbines. The system does lose some electrical conversion capacity (reaching 70% of the yield of a conventional alternator), because the design is so focused on avoiding and wear and tear.

Scepticism has also followed the new wind turbine: most wind-harvesting technologies only work at a fraction of their most efficient output. Wind turbines need smooth, laminar airflow; the kind you only really find at about 300 feet above the ground. On the other hand, the device has been tested in a wind tunnel and there are already prototypes out in the open, so there is a chance that this bladeless turbine may come to replace the fan-like structures that we have become so used to.

This news was brought to you by UKPower.co.uk. Find out more about the Vortex Bladeless here.