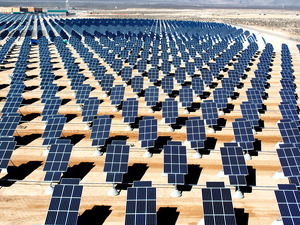 A new report from the International Energy Agency (IEA) has found that the sun could become the world’s largest energy source by the turn of the mid-century, helping to deter global warming by preventing the release of potentially billions of tons of carbon dioxide emissions.

IEA’s reports indicated that solar photovoltaic (PV) systems could generate up to 16% of the world’s electricity by 2050, while solar thermal electricity (STE) could provide a further 11%.

If PV and STE do provide 27% of the world's energy by the middle of the century, fossil fuels would only account for 12 to 20%. This is in stark contrast to the world’s current renewable energy position, which sees fossil fuels provide 68% of our power, and all other renewable energy, including wind and biomass, providing just 20%.

The solar industry has seen considerable growth in recent years as technology improves and becomes more financially accessible, with the general global demand for solar power expected to double every two years through to 2022. If growth continues at this rate, this could prove incredibly beneficial for alternative energy efforts on an international scale.

Maria van der Hoeven, Executive Director at the IEA, said of the prediction: “The rapid cost decrease of photovoltaic modules and systems in the last few years has opened new perspectives for using solar energy as a major source of electricity in the coming years and decades.”

Ms. van der Hoeven added that the price of PV systems is forecasted to drop by a significant 65 percent by 2050, according to IEA’s number-crunching. However, this will only be achievable if market reforms and tax subsidies are encouraged in countries across the globe, such as the Unites States’ solar investment tax credit scheme, which provides a 30 percent tax credit for solar systems on residential and commercial properties.

Worldwide, it is expected that China will continue to lead the way on PV technology, closely followed by the United States. STE technology, however, has much more potential in areas receiving heavier coverage from the sun, making it more likely to see success in Africa, India, and the Middle East.