Why leaving the light on could be damaging your health 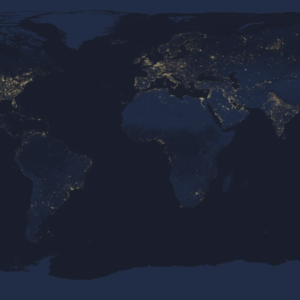 Sometimes there are perfectly good reasons for not switching off, a landing light or bedside lamp is often the only way to keep the kids’ wardrobe monsters at bay, but most of the time it’s just absent-mindedness.

Whatever the reason, needlessly leaving any lights on is a waste of energy and money – and new reasearch has found it could also be bad for our health.

Why do you leave the lights on? Please vote ✅ and RT.#lightpollution #energyefficiency

A new study into the extent of light pollution on Earth has found that artificial light is growing brighter and longer, year after year – the planet has seen a 2% increase in artificially lit outdoor area in the last four years alone – and scientists are suggesting that this global loss of night-time, is having negative consequences on the environment and people’s health.

After taking data from a NASA satellite radiometer - a device designed specifically to measure the brightness of night-time light – scientists found that while light pollution levels have remained largely unchanged across much of Europe and the US, most African, Asian and South American nations are growing brighter.

The only places that showed a drop in light pollution levels were war-torn nations including Syria and Yemen.

The images show the spider-like outlines of global nations and continents, instantly identifying the world’s most densely populated areas, but it’s believed the light pollution problem could be even more pronounced on the ground than seen from space, as the satellite sensor does not "see" the bluer light that humans can see.

Why is light pollution bad for your health?

The major, and most obvious, impact light pollution has on us is that it simply makes sleeping more difficult. The American Medical Association warns that night time lighting, especially the blue-white LED variety, “is associated with reduced sleep times, dissatisfaction with sleep quality, excessive sleepiness, impaired daytime functioning and obesity.”

And research from Harvard University has found that artificial lighting cuts melatonin levels, which influences circadian rhythm – basically your ‘body clock’, the cycle that tells you when to sleep, wake, eat, etc. – and has been linked to increased breast cancer rates.

Why is light pollution bad for the environment?

Aside from the environmental effects of using more energy, artificial light is playing havoc with Earth’s eco-system. A recent study found that artificial light near waterways is disrupting food chains as insects are being drawn towards the lights and away from the water surface and their natural predators.

Conversely, turtle numbers are declining as hatchlings, which use moonlight to find the sea, are becoming confused by artificial lighting across beach areas, meaning they are lured away from the water and are easily picked off by predators.

And a 2016 study found many trees are now blooming out of season as artificial lighting is causing buds to burst prematurely, leaving them vulnerable to cold temperatures. This is a problem that can also affect crops and orchards.

How to help stop light pollution

We can all do our bit to help curb light pollution, and the first step is to simply switch of any lights that aren’t needed - switching a light off for just a few seconds will save more energy than it takes for the light to start up again and can save around £13 a year.

Fit motion sensors to any outdoor security lights, instead of leaving them on all night, and switch to more energy-efficient lighting, both indoors and outdoors.

And replace any standard light bulbs with energy saving bulbs, also known as compact fluorescent lamps or CFLs, and halogen bulbs with LED spotlights. It will probably cost you around £100 to replace all the old-fashioned light bulbs, but will save in the region £35 a year on energy bills.

It might also be worth getting in touch with your local council, and suggest they switch off street lights in certain areas during certain night time hours.

And, if those wardrobe monsters are a persistent problem, see if a small, energy-efficient plug-in night light and a less scary bedtime story does the trick.