Ofgem has proposed a £21 hike on energy bills from next April to cover increasing levels of “bad debt”. The price hike will come as part of the next energy price cap review, which means only those on standard variable rate tariffs will be hit by the increase.

While it’s irrefutable that no household should suffer the stresses caused by being cut off, especially given the circumstances people currently find themselves in through no fault of their own, here’s why we don’t think this is the best way to address the shortfall.

In short, energy debt is on the rise.

When suppliers can’t collect money owed by people who aren’t able to pay their bills, including those who’ve previously set up repayment plans, these debts are known as ‘bad debts’.

And these bad debts account for a £209 million black hole in the balance sheets of Britain’s energy suppliers, according to figures from Citizens Advice.

Although bad debts are a fact of life for energy suppliers - the energy price cap methodology includes an allowance for suppliers to recover the cost of bad debt expected in normal economic times - the situation is much worse this year.

As you’d expect, the impact of the pandemic is the main reason for the rise in energy debt, as drops in wages due to people being furloughed or even losing their jobs means more households are struggling to pay their energy bills.

It’s a problem that goes way beyond energy bills though, and figures from Citizens Advice puts the total arrears across all household bills at a staggering £1.6 billion.

According to Ofgem, the solution lies in a £21 increase to the energy price cap, which has been provisionally pencilled in for April 2021.

The regulator insists that the net impact to households will be an increase of about £6, because the proposed increase will be partially offset by the ending of a temporary £15 increase, which was implemented to reflect the outcome of a judicial review into how Ofgem calculated suppliers’ wholesale energy costs in the first cap period.

In reality, it still amounts to a £21 increase for households on standard variable rate tariffs.

But we’re not convinced this is the best way to make up any shortfall. Here’s why.

Why an energy price cap increase isn’t the answer

An increase on the price cap also fails to take into account the fact that the problems caused by the pandemic won’t be going away any time soon, meaning those people who are already struggling to pay their bills will continue to do so.

It could even lead to energy debt among those households who are just about managing to pay their bills but could be tipped over the edge by any rate rises - £21 might not seem like much, but every penny makes a huge amount of difference when you’re already right on the margins.

And that’s before the first ‘winter lockdown’ bills arrive.

Most, if not all of us, have had to spend prolonged periods of time at home due to continued lockdown restrictions - whether that’s working from home during the week, spending more time indoors at weekends, or both - which means we’re already paying more on gas and electricity than we would normally at this time of year.

With no real end to lockdown in sight - we’ll be on local restrictions as and when ‘lockdown 2’ comes to a close - we could see record winter energy bills. This alone could plunge even more into energy debt as we lurch towards 2021.

Again, a price hike seems to be counter productive in this instance.

But what’s the solution?

Utilities debt is a unique problem - we can’t live without our utilities, even if we can’t afford to pay for them.

This means that, for some, debts continue to creep up regardless of whether or not they’ve put measures in place to address them, including cutting back on usage and arranging payment plans. 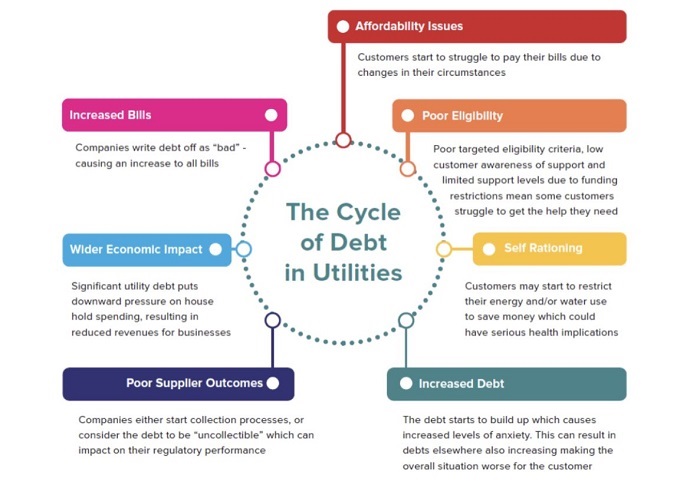 The simple root cause of debt is that people don’t have money. And this is where government support is needed.

Instead of upping the price cap - especially by a flat rate that will hit those on the lowest incomes - keep the £20 uplift on Universal Credit and extend the Warm Home Discount to cover those hardest hit by the pandemic.

Energy companies also need to work closely with customers to implement affordable repayment plans or payment breaks that can work effectively and not just put the problem back a few months while debt troubles continue to mount.

And then there’s the thorny subject of supplier profits and shareholder payments, but that’s another can of worms…

Switch energy to save more

Although your energy supplier can block your switch if you're in a certain amount of debt with them, if you are in a position to switch then this is the simplest way to cut your energy bills.

Our short video explains all you need to know.