UK could save £3.24 million by turning lights off this Halloween 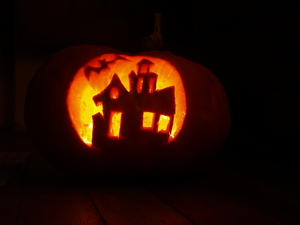 If all of Britain’s households switched off their lights this Halloween – whether to avoid trick-or-treaters or just to get in the spooky spirit – they would collectively save £3.24 million in electricity.

If each household turned off three lights for just four hours tonight – perhaps lighting some Halloween candles as an alternative – the UK’s electricity consumption would be reduced by 19.44 million kWhs – which is about the equivalent of the average yearly energy usage of over 1,200 homes1.

According to ourrunning costs calculator, the average light bulb consumes 1.24 kWhs over a four hour period. On its own, this may not seem so impressive, but when translated to apply to three bulbs per home (totalling around a whopping 81 million bulbs), the numbers - and the savings - are much more impressive.

The money saved by switching off between 6pm and 10pm would be more than enough to cover the £1.9 that the UK spends on Halloween pumpkins each year almost twice over2. A four hour reduction in nationwide electricity consumption is the equivalent of almost 13.5 million kilograms of carbon dioxide - which could produce as many as 1.36 million (toffee) apples3 to enjoy as Halloween goodies.

Potential energy savings are just one more reason to enjoy the fiendish fun of Halloween night. Why not try turning off your lights during tonight’s witching hour(s), and see how much you could save.

1. The average household consumes 3,300 kWh according to Ofgem.

3. Calculation thanks to the Carbonize App from ECO2 Greetings.