Use of Solar Power nearly doubles due to energy price increase. 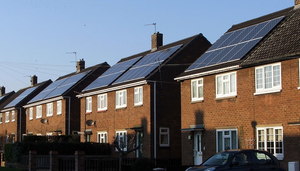 Scott Byrom, energy expert at UKPower.co.uk , said “It’s inevitable that as we drive towards reducing our energy consumption through expensive energy efficient measures, and as we compete more and more in a global energy market, the unit cost of energy is going to increase.”

The Green Deal is set up in order to save you money on your energy and also to reduce our carbon footprint as a whole. Examples that you may be most familiar with include:

With this is mind businesses are rising the price per unit of energy and in response to this Solar Power has almost doubled in the last year. Over 650,000 installations ranging from solar farms to panelling on domestic rooftops. The solar industry has said there is now enough solar panels to power roughly 1.5million homes. There are a few ways to install Solar Panels, from buying them outright, attaining them through the Green Deal and the rent-a-roof scheme whereby companies install the system free in return for pocketing payments for the surplus energy that is fed into the National Grid. Of the homeowners who have solar panels on their roofs, seven out of ten paid for them themselves and only a fifth used the 'rent-a-roof' scheme.

Claudia Preedy, a Mintel analyst , said: “Although the market remains in its infancy, demand for solar panels has exploded since 2010 and there continues to be strong growth potential. The market was originally driven by residential roof-top installations, reflecting the introduction of the FIT (Feed in Tariff) scheme in April 2010.”

Paul Barwell, chief executive of the Solar Trade Association said: “This milestone achievement is testament to the hard work of Britain’s several thousand solar businesses, almost of all of them small and medium-sized companies, who are all at the forefront of a real solar transformation as the technology steadily becomes one of the cheapest sources of clean, home-grown power.”

Scott Byrom , said: “It’s a smart move seeking to invest in more sustainable and long-term energy sources such as solar panels to reduce demand on the grid and utilise natural energy resources. The return on investment for solar panels is still strong and helps customers reduce their energy bills as well as their carbon emissions making it a win-win situation for our pockets and the environment.”