Fracking plans have been rejected by Lancashire council. 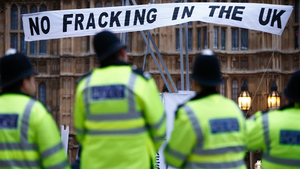 Fracking is a technique used to extract gas by pumping chemicals and water into shale rock at high pressure.

Energy firm Cuadrilla wanted to extract shale gas at the little Plumpton site near Preston, but the Lancashire County Council rejected the plans at 11.17am on the grounds of “unacceptable noise impact and adverse effect of the landscape”

“This is one of the biggest planning decisions ever put before Lancashire County Council. The development control committee has listened very carefully to many hours of evidence both for and against the proposal and considered the report of the council's planning officers. The decision to refuse this application has been reached by a vote of the committee, which is composed of elected councillors, and each member of the committee has ultimately cast their vote based on the evidence they have heard and whether they think the proposal is acceptable in planning terms, and to the people they represent.”

Hundreds of protestors gathered around the council building to show their opposition to fracking, which was suspended in 2011 after the tremors in Blackpool where Cuadrilla had last drilled.

Joy spread through the crowd hurriedly as the news hit, Jamie Peters of Friends of the Earth said through tears "this shows people power has worked. The councillors have listened to what people want,"

Chris Riley from Kirkham said it was brilliant they had overturned both decisions, adding: "We were hoping they would, but they couldn't possibly go ahead with the damage it would cause."

A statement from Cuadrilla was released saying they were surprised and disappointed at the result “We will now take time to consider our options regarding an appeal for Preston New Road, along with also considering appeals for the planning applications recently turned down, against officer advice, for monitoring and site restoration at Grange Hill, and last week’s decision to refuse the Roseacre Wood application,” the statement said.

Centrica - who holds a 25% stake in Cuadrilla - said it was extremely disappointed by the decision. “It has taken a significant amount of investment to get us where we are today so we will be working closely with our partners at Cuadrilla before making any decisions on our next steps.”

Greenpeace UK energy and climate campaigner Daisy Sands said the decision was "a Waterloo for the fracking industry" and a "triumph for local democracy. Their decision sends a powerful signal to other councils that the fracking juggernaut can indeed be stopped.”