Is it time to go green?

The UK is turning green - not only do greenhouse gas emissions continue to fall, but 2020 saw renewable sources produce more energy than fossil fuels, for the first time ever.

So, is it time we all went green? 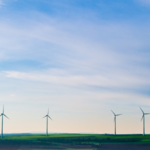 What is renewable energy?

Renewable energy is simply energy from sources that are not depleted when used, such as wind or solar power.

So where there is a finite amount of fossil fuels in the world - when one piece of coal is used, it’s gone forever as an energy source – resources such as wind and solar power have no limit on the number of times they can be used to generate power.

How the UK is going green

Last year saw Britain’s overall greenhouse gas emissions drop by 10.7%, with CO2 emissions from transport falling by 19.6%, and by 8.7% across industry.

CO2 emissions from the energy supply sector fell by 11.9% following lower demand during the pandemic and the continued reduction in fossil fuel use in power stations.

On the flipside, as more of us stayed indoors during the multiple lockdowns, CO2 emissions from the residential sector increased by 1.8%.

But the overall picture is positive and shows a continuing trend in Britain.

In 2019, the UK’s network of windfarms and solar panels generated more energy than the combined efforts of the UK’s eight nuclear power stations. Caroline Lucas, former Green Party leader, has since suggested this could be the beginning of the end for nuclear power.

Another nail in the coffin for the case for nuclear power .... https://t.co/Y6BS99hZYP

But reports of the death of nuclear power could be a little premature.

Figures from the Department for Business, Energy and Industrial Strategy show that renewables generated 18.33 tetrawatt hours (TWh) of energy to nuclear’s 16.69TWh in 2017, but high wind speeds, new renewable installations, and low nuclear output towards the back end of last year, all could have played a big part in wind and solar energy generation edging out nuclear.

Gas also saw a slight drop in its share of generation, but is still far and away the UK’s number one source of electricity production at 36.12 TWh.

Greenpeace said the figures showed the government should capitalise on its lead in renewables and “stop wasting time and money propping up nuclear power” - a reference to how the Conservatives have backed projects like Hinckley Point C and small module reactors (SMRs) while ending subsidies for onshore wind farms.

But, more significantly, renewables are consistently providing more power than fossil fuels, which is the biggest indicator yet that we're moving towards a greener future.

UK government statistics show that renewable electricity generation outperformed fossil fuels for the first year ever in 2020, providing 43% of the country’s electricity.

Fossil fuels generated 38.5%, according to the Department for Business, Energy and Industrial Strategy’s Energy Trends report.

Onshore and offshore wind provided more than half of the UK’s renewable power in 2020 by generating 24.2% of the UK’s electricity needs (13% from offshore wind and 11.2% from onshore wind). Low carbon sources (renewables and nuclear) generated 59%.

How to go green

Going green will benefit all of us in the long run, with cheaper and more sustainable energy production – the problem right now though, is that it costs to go green, whether you want to generate your own energy, or sign up to a green energy tariff.

Solar panel costs vary and often depend upon both the size of the panels and the amount of electricity you are looking to generate. The average household will find that a 3.5kWp system will do the trick, which will costs around £6,500, but smaller systems are available for about £2,500, while larger units can see you shell out over £15,000.

Some energy companies do offer free solar panel installation though, so it’s always worth checking before you agree to foot the bill for installation.

Once installed, solar pv systems can knock up to 50% off your annual energy bills, and you could even make money by selling any unused power back to National Grid through a feed-in tariff scheme, that could see you earn as much as 4.5p per kWh.

For more information, check out Everything you need to know about renewable energy.