Renewable energy technology is getting cheaper, more efficient and more accessible. But could every home really be wind-powered by 2030?

Speaking at today’s Conservative Party Conference, the PM made the commitment as part of a pledge to invest £160 million in UK ports and factories to ensure the next generation of wind turbines are made in the UK. 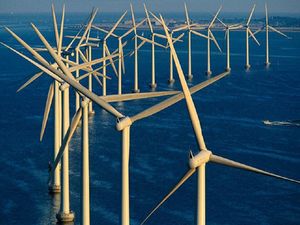 Reaffirming a manifesto promise to increase offshore wind energy generation and supply by a third, Johnson said: “You heard me right. Your kettle, your washing machine, your cooker, your heating, your plug-in electric vehicle — the whole lot of them will get their juice cleanly and without guilt from the breezes that blow around these islands.”

But how much energy does the UK already generate using offshore windfarms?

How much energy is produced by renewables in the UK?

October 2019 was a momentous month for renewable energy in the UK as, for the first time ever, renewables provided more electricity to UK homes and businesses than fossil fuels.

This was the first time that renewable electricity production, from British wind farms, solar panels and renewable biomass plants, accounted for 40% of total generation and surpassed fossil fuels since the UK’s first power plant fired up in 1882.

Renewables then provided one of the only positive news stories of 2020, as it was responsible for generating almost half (47%) of Britain’s electricity in the first three months of the year, with a surge in wind power helping to set a new record for clean energy.

A huge surge in the generation provided by offshore wind farms is responsible for the largest increase in renewable energy in the first quarter of the year, climbing by 53% compared with the previous year. Onshore wind generations also played its part, growing by a fifth year-on-year.

The UK is in a good position to keep growing its renewable electricity generation, but the government’s plan goes beyond that.

The government’s plan for renewables lies not only in domestic generation, but also in manufacturing and exporting the technology worldwide.

Johnson said: “We need to give people the chance to train for the new jobs that are being created every day — in new technologies and new ways of doing things.

“And there is one area where we are progressing quite literally with gale force speed and that is the green economy: the green industrial revolution that in the next ten years will create hundreds of thousands, if not millions, of jobs.

“I can today announce that the UK government has decided to become the world leader in low-cost clean power generation — cheaper than coal and gas — and we believe that in ten years’ time offshore wind will be powering every home in the country, with our target rising from 30 gigawatts to 40 gigawatts.”

There are also plans to create a new offshore grid to link wind farms to interconnectors - the high-voltage cables that enable the transfer of the electricity across borders - to help position the UK as the world’s number one provider of wind generation.

And the plans also involve the creation of floating windmills out at sea with the capacity to deliver 1 gigawatt of energy by 2030, which is 15 times as much as the rest of the world put together.

While £160 million might sound like a sizable investment, let’s not forget this government somehow spent close to £12 million on a ‘world beating’ test and trace app that never worked, along with several more billions on spurious PPE contracts.

While any commitment to renewables should be welcomed, it’s hard not to come to the conclusion that this is just lip service from the government or, even worse, nothing more than hot air.

Want to save money and do your bit for the environment? Compare energy deal with UKPower and switch to a green tariff.