The Department of Energy and Climate Change (DECC) have launched a new campaign called Power to Switch, encouraging consumers to take control of their energy bills. The aim of the campaign is to ultimately stop consumers paying more than they need to for gas and electricity, by making sure that they are on the cheapest deals available. 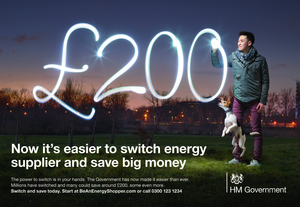 A whopping £2.7 billion in total is being overspent by 13.5 million UK households, through failure to review the best deals on the market and switch suppliers. This amounts to an average of around £200 per household each year, although customers who have not switched in the past 12 months could stand to save significantly more.

Ed Davey, Energy and Climate Change Secretary, is emphasising how the power to change the energy market is now in the hands of consumers. The government’s recent programme to reform the energy market has made a number of changes:

These changes have made the energy market a fairer place for energy customers, and it’s now time for consumers to take control of their energy and engage with the market.

Scott Byrom, energy expert at UKPower.co.uk, added “The success or failure of the energy switching market is now firmly in our hands as consumers. Whilst there are still improvements to be made in the industry, Ofgem has worked to remove the barriers that previously discouraged us from switching. This inertia to switch and find a better deal only played to benefit the ‘Big Six’ and so it’s crucial that we finally vote with our feet and follow in the footsteps of other industries such as car and home insurance. By switching annually, and forcing suppliers to fight for our custom, we’ll all benefit from greater competition, more competitive rates and better customer service.”

Watch the official Power to Switch video below:

Follow the link to run a domestic energy comparison and see if you could get a better deal on your home energy.