How to reduce your carbon footprint at home

If there was one positive to take from the the last 12 months, it's that the enforced lockdowns to protect against coronavirus transmission saw a dramatic drop in carbon emissions.

This helped 2020 become a landmark year in energy production, as it became the first year in which renewable energy generation created more electricity in the UK than fossil fuels.

Which shows that we can all help the fight against climate change. 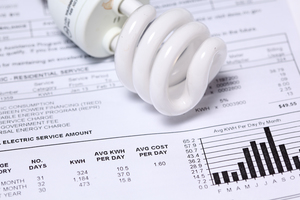 Although ‘Carbon footprint’ sounds like a buzz phrase, in reality it’s far more than just a concept – it’s a measure of the impact our everyday processes have on the planet.

Put simply, a carbon footprint is the amount of carbon dioxide pumped into the atmosphere as a result of the activities of people, businesses and organisations.

Why should we care about carbon footprint?

Carbon emissions come from a range of sources, synonymous with modern life, from vehicles to energy plants and factories. All produce a level of carbon dioxide and in high concentrations, and all have a negative effect on the environment.

Experts have stated that global temperatures are rising, and the increased output of carbon has contributed to this. Known commonly as climate change, we’re arguably already seeing the results through more extreme weather conditions, and natural disasters like drought, flooding and wildfires.

What is your carbon footprint?

Your carbon footprint is a measure of the impact your activities have on the environment – namely, in terms of the amount of greenhouse gases produced, as measured in units of carbon dioxide.

A carbon footprint is made up of the sum of two parts: the direct/primary footprint and the indirect/secondary footprint.

The table below demonstrates a typical breakdown of a UK resident’s primary and secondary carbon footprint:

Six ways to cut your carbon footprint from home

Here are a few simple but effective steps you can take to help reduce your family’s carbon footprint.

1. Cut down on everyday travel

Cars emit CO2, so reducing the amount you drive is the first, fairly straightforward way to help reduce your footprint. If you live in a town or city, walking to the station or catching public transport is a good place to start.

Driving a low emissions vehicle or an electric vehicle is also good. In the UK, owners of cars registered after April this year will pay car tax based on the CO2 emissions of their vehicle, so there is a financial benefit as well as one for the environment.

Using fossil fuels (which contribute to a lot of the energy that powers our homes) creates CO2, and therefore creates a carbon footprint. Heating, especially in the varied climate of the UK, is a big contributor to energy consumption.

Draught excluders for your doors, letterboxes and keyholes are a cheap but effective way to keep heat in during the colder months. Gaps between floorboards and skirting boards that leak heat can also be plugged to help insulate your home.

Aluminium sheets or foil behind the radiators are age-old methods of boosting their heat output, and can be easily and cheaply installed, reflecting heat back into your rooms. A well-insulated loft and walls are another way to help reduce heat loss through cavities and your roof and of course double glazing is a quick fix to stopping heat from quite literally going out of the window.

Energy-saving light bulbs and LEDs will save loads of energy compared with traditional high-consumption versions. Fit them wherever possible in your home, to reduce the amount of energy you’re using.

There are many different ways in which you can easily cut down your water consumption, subsequently cutting down on your CO2 usage.

In most cases (unless using certain power showers), showering is more environmentally friendly than running a bath, as are combi-boilers (where water is heated up on demand as opposed to being warmed and stored in a tank). Small things, like not leaving taps dripping, only boiling the water you need when making a hot drink and turning the tap off while brushing your teeth and washing up are all other effective ways to reduce water waste.

Filtering your own water, instead of buying bottled water, is much more kind to the planet, as plastic waste doesn’t bio-degrade and has a negative impact on the environment.

We’ve been hearing about recycling for some time now, and in the UK as a whole, steps have been taken to enforce recycling as a way of life. Initiatives such as the nationwide charge for plastic carrier bags, and the revamp of way waste is removed from our homes (separate bins for food, recycling and general rubbish) by local councils should help to reduce carbon emissions, but there are certainly other ways in which we can all contribute further.

Reusing plastic bags (if you must use them at all) will help. The same goes for bottles, however using multi-use items instead is a much safer bet.

5. Consider the food you eat and how you store it

Even our beloved food causes us to leave a carbon footprint. Storage, production, transportation and disposal all quickly add up to something that can be fairly sizeable.

Firstly, the position of your fridge in the kitchen can have an impact on how efficiently it runs. Try to keep it away from the oven and anywhere the sun will directly beam on it. Placing it next to an exterior wall will mean any heat it produces can easily escape and allowing space around your fridge will let air circulate around it. Defrosting your fridge / freezer regularly will also help keep it running well.

Let your food cool down before putting it in the fridge as it won’t have to work as hard to keep it cool. Eating locally produced food will help to cut down on the carbon emissions produced when transporting supplies from further afield. Consuming less meat and dairy also helps to cut down your footprint. This is because raising cows and livestock requires is fairly resource-heavy, and a lot of the ground used for grazing, especially in places like Brazil were former rainforest sites. Deforestation is one of the biggest contributors to climate change.

However small, there are simple things we can all do to help reduce the amount of carbon dioxide we are responsible for producing.

6. Switch to a green energy deal

Most of us switch energy supplier to cut the cost of our energy bills.

To find out if a green energy deal could help you save money and the planet, compare energy suppliers with UKPower now.