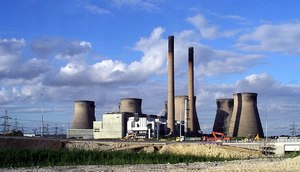 SSE will be closing down the coal-fired power station next March in Ferrybridge, resulting in 172 people losing their jobs.

"We know that the decision to end coal-fired generation at Ferrybridge will have an impact on the local community and it has not been taken lightly," said Paul Smith, SSE's managing director for generation.

"But while this was a difficult decision to take, it was the right one. Financially, the station is currently loss-making and is anticipated to lose another £100m over the next five years, and environmentally coal is a major emitter of CO2 [carbon dioxide], which means it has a time-limited role in the UK's electricity mix.”

“This was a very difficult decision to take because of the impact on our Ferrybridge employees, their families and the community.”

"It's been known for many years that the UK would have to phase out coal as it moves towards a more sustainable energy mix. We've sought to protect jobs and invest in the site to keep it running for as long as we possibly could but ultimately we've had to make this regrettable decision today."

“Unfortunately, this means retaining coal-fired operations at Ferrybridge beyond the end of the current financial year is not sustainable."

Of the 172 staff affected, some may be re-deployed. Mr Smith added: "Our top priorities will be to keep the site operating safely and effectively for the remainder of its life, and as it moves into decommissioning; and to ensure that employees have a range of options available to them for the future."